Why 2016 Massacre of the Rhoden Family in Ohio Unsolved?

On April 22, 2016, the bodies of eight people from the same Rhoden family were found in four homes in Pike County, Ohio. They were fatally shot execution-style. 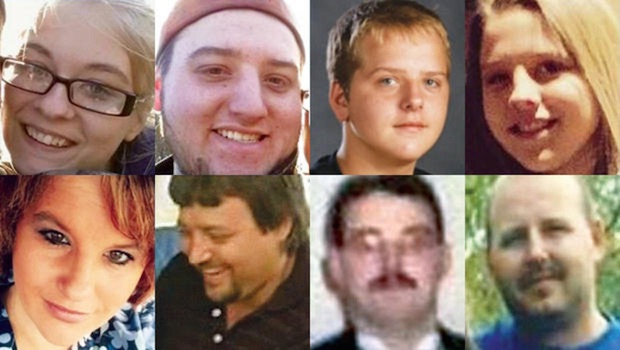 Despite public appeals and hundreds of leads provided by neighbors, no arrests or accusations have been made.

Previously, another page described another unsolved mystery of killing of 8 Holistic & Alternative Doctors in June-July of 2015 in Florida. The mentioned page also described how 15+ top microbiologists mysteriously died under suspicious circumstances in about 4 years soon after 9/11 2001.

It is likely that all these crimes were organized or managed by highly professional hitmen who have excellent knowledge related to FBI surveillance methods.

The execution-nature of all these crimes (with over 30 dead people) can lead us to the assumption that these crimes could be organized by the world’s prime executioners. Historical evidence suggests that the top world’s executioners who were never tried in courts or punished for their crimes are surviving GULAG KGB agents (those KGB agents who managed GULAG labor camps during Soviet times, mainly in Siberia, where millions of people were executed).

Communication in the modern world is under the control of national security organizations (including internet and phone communication), such as FBI, MI5, CSIS, and others. Since GULAG KGB agents are from the same “controlling” environment, surely these KGB agents have good knowledge and skills in getting information about their targets and about abilities of FBI agents (feds).

How the mind of a successful police detective works

In order to answer the main question “Why these crimes are not solved”, we can first look at the mind of a successful police detective. What is he busy with, when solving large crimes and looking for serial killers?

It is certain that, while solving such crimes, a successful police detective is completely absorbed into his work analyzing who the killers could be, where they can be now, how they got to the crime scene, where they went after the crimes, etc. meaning that there would be clues that can lead to results. The same can be applied to shootings of the members of Rhoden family in Ohio.

What about the minds of FBI agents?

I had been experienced activities of national security agents for over 20 years, and there are numerous pages on this site that describe 100s of events organized by secret agents from national security organizations, FBI included.

It is certain that the mind of the typical agent is preoccupied with a complex web related to how to manipulate imagination of other people so that to preserve certain beliefs that are present in ordinary civilians, targets of the Mafia, policemen, doctors, politicians, lawyers, and many other groups of people commonly recruited as stooges for various operations or who are targets of clandestine operations organized by secret agents.

Such operations of FBI and CSIS agents have been described on this site:

My firm belief is that in order to sustain this extra complex web of beliefs in hundreds or thousands of civilians, an average secret agent (those who watch in secret cameras and recruit or control stooges) needs to devote up to 97-99% of his brain to these activities.

In my view, the most popular, by far, the single activity of modern teams of secret agents is called “dog training”. There are thousands of techniques developed and shared by secret agents of different countries related to this activity. The two above links provide numerous examples of such activities.

Thus, those who protect this confidential information, need to control only this specific detail, not the imagination of hundreds or thousands of people who know about this detail due to their professional involvement.

In the world of national security organizations, secrecy is used, to a large degree, for protection of activities of secret agents related to their work with stooges, as well as for special secret operations that secret agents carry on themselves against targets of the GULAG KGB Mafia. Controlling and shaping imagination of stooges and targets is a large part of their secret daily life.

Since activities and vision of life are different for secret agents from different countries and regions of the same country (any large country has numerous teams of agents usually due to municipal divisions), there are following additional details:

As a result, the minds of secret agents are currently directed to areas that are irrelevant to solving crimes and finding murderers. Therefore, it is very difficult or nearly impossible for them to find responsible serial killers and those who sent them to massacre the Rhoden family, alternative health doctors in Florida, as well as hundreds of other civilians.

Q: Why did Mafia people spare 3 young children during the recent unsolved massacre of 8 members of Rhoden family in Ohio?