In this article, I will do reverse engineering of the modern GULAG KGB mafia or analyze what is very important for producing dozens or hundreds of totally obedient human robots (zombies) who can be used later for massacres, suicide-murders, shootings, killing own family members, children, themselves, etc. In other words, the article will discover crucial factors of total brainwashing. After this analysis, it would be easier to understand why the GULAG KGB mafia hunts certain movements and people.

The next logical question is the following. What are the easiest methods to isolate a person? In a totalitarian society, authorities can isolate nearly any person. In the modern world, generally, isolation cannot be forced. This means that the victim (future robot) should seek isolation himself or herself. When could a person seek isolation with another person or other people? There is only one very common situation when people seek seclusion: sex.

Hence, the easiest conditions for total brainwashing are created when people are seduced due to sex. In these conditions, a person would seek isolation or seclusion himself or herself.

Which percentage of the modern population can be seduced by sex? Probably, the majority of modern males can be nearly instantaneously seduced by some attractive females, and only a small number of females (less than 3%) can be instantaneously lured by males, especially if these males are strangers.

At the same time, well over 90% (probably over 97%) of modern massacres, shootings, plane crashes, explosions, etc., with the use of total mind control, are committed by males.

Therefore, we immediately see that any brainwashing technique, when it has been applied many times, on a mass scale, or as a mass factory or conveyer that produces many robots, requires attractive or seductive females to do the main job.

This is true regardless of the origins of total brainwashing. For example, if zombies on the Earth were or are manufactured by aliens, these aliens would need cute attractive females for the mass production of new robots. The same is true if one assumes that zombies are produced by Illuminati, Moroniti, or any other secret sect or group of people. The same idea about the leading role of attractive females was true 100 or 500 years ago. This idea will also likely remain true 2, 5, or 10 centuries in the future.

The next observation is that the brainwashing method itself can involve hypnosis, use of special drugs, manipulation of energy points of the human body, application of special fields or extrasensory techniques (EST), or a combination of these methods. But in all these cases, the use of seductive females is crucial for mass robot-making.

How to find and make young attractive female zombies? There are fewer females, probably by about 10-100 times, which seek seclusion when meeting strangers in comparison with the number of males who would seek isolation or seclusion. Among such females, there is one particular type that is great for robot-making: uncontrollable nymphos (defined as “women with strong sexual desires”). “Uncontrollable” means that they are not able to control their sexual desires and could be easily seduced by males, even by strangers. 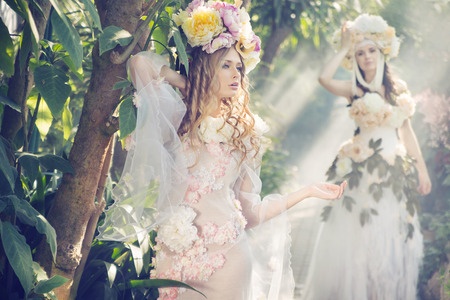 By the way, “nymph” has Greek roots, it is one of a “class of inferior female deities presented as inhabiting the sea, springs, wells, woods, etc.”.

The conclusion is that robot-making, regardless of its origins (who uses brainwashing) and the specific method (how zombies are made), is directly linked with a degree of promiscuity in different groups of people and application of seductive females.

Assuming that a single female robot-maker can be used for production of numerous male robots while improving her skills, we have to come to the conclusion that the foundation of robot-making are in young attractive females, due to their abilities to successfully learn the craft of robot-making and improve/advance in this area, while older females would be less effective candidates to become effective robot-makers.

If we look at the opposite problem related to prevention of mass robot-making, then we need to ask the following. Which factors in the social and personal lives of young females make them more or less likely to become uncontrollable nymphos? (My understanding is that both, the Buteyko method and the New Decision Therapy, are something that robot-makers should be very afraid of. So, now we know why Dr. Buteyko and Kandis Blakely, as well as their followers, have been targeted by the GULAG KGB mafia.)

As about the chances of the seduction of males, the same social and personal or physiological factors can play their roles as well. In both cases, we talking about promiscuity within human society and how automatic breathing, forgiveness, social norms, and many other factors influence choices that influence the sexual behavior of humans. And this is another topic that we can discuss later.