Terror threat can have many faces. While most known forms of terrorism involve claiming responsibility for crimes, there is one group of terrorists that prefer to hide its presence. Moreover, this group uses seduction-based total mind control (brainwashing techniques) in order to use the brainwashed (zombies or robots) for their terror acts. Suicide-murders are among the most common types of terror threat used by GULAG KGB agents (a small part of KGB mainly from rural areas of modern Russia). Since it takes only a few hours for the traveling KGB spy to make a new zombie using their seduction-based brainwashing techniques, terror threat level is very high since modern people have no knowledge about this terror threat and do not protect themselves and others.

Terror threat can come from anyone who can be seduced and brainwashed by KGB spies. However, KGB agents often use people with mental problems, since their suicide-murders will get “logical explanation”: they were angry and therefore killed their relatives and/or others and then themselves. As a result of brainwashing, and depending on the type of work the brainwashed person does, terror threat can be present in many areas since the brainwashed will execute any order from the programmer. The chart below shows some of the examples of terror threat, such massacre, arson, explosion, murder, air disaster, and germ warfare. 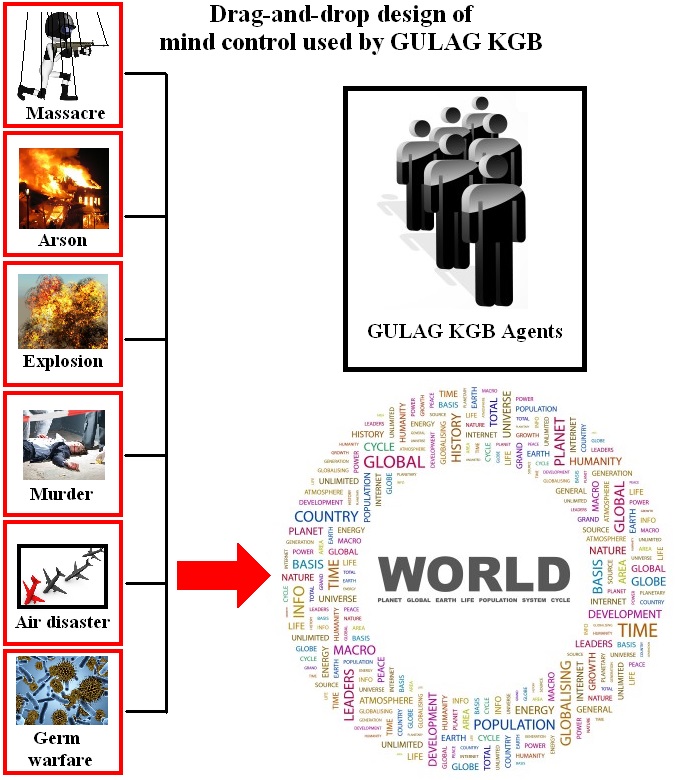 Reduce terror threat due to brainwashing

Reduction of this main terror threat requires public awareness about the method, tactic, and expectations of the GULAG KGB agents. The web pages below provide numerous specific examples how GULAG KGB spies organize crimes, what the changes in the brainwashed are, how one can protect themselves, and how to detect the brainwashed zombies, especially if they are relatives or close friends.