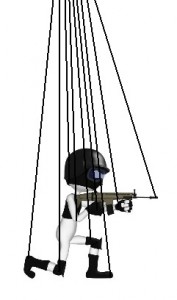 Russian terrorism takes place on a mass scale due to the application of the fast seduction-based brainwashing technique (with total mind control in a few hours). The brainwashing technique can transform an ordinary person into a nearly ideal killing machine due to profound physiological changes that take place in the brainwashed. Hidden nature and exceptional levels of conspiracy for all involved sides are crucial features of modern Russian terrorism that are organized by a small, but mighty (in relation to new murders) part of modern Russian secret service FSB or KGB).

There are numerous examples that testify about the involvement of Russian fast-acting seduction based brainwashing techniques. They are described in detail on other pages of this site (see links below). Do you know why is it so little known about Russian terrorism and chief world’s brainwashing lab: the KGB GULAG labor camps and their rules: Russian KGB agents?

Consider a very rare exhibition about KGB GULAG labor camps organized by Dr. Steven Barnes (Assistant Professor in History of George Mason University, Fairfax, Virginia, USA). The preparation for the first exhibition started in 2005. From December 2005 until November 2006, four suicide-murders took place in this small county. An unprecedented explosion of crimes, as the newspaper reported since during the previous period of at least 2 years, there were no such crimes at all.

Many other examples of Russian terrorism are described on other pages and include cases with application of total brainwashing techniques leading to famous massacres, large suicide-murders, arsons, air crashes, explosions, and other disasters mostly in the USA, but also in other parts of the world.

Russian terrorism is Many Russian organizations and groups suggest that even such large events as Beslan School Crisis and Apartment Explosions were organized by Russian FSB-KGB agents. It is also documented that, while in Siberia, Dr. Kontantin Buteyko, the author of the Buteyko breathing method, was a target to be assassinated by some mysterious Mafia about 4-5 times. There were also severe persecutions of Buteyko breathing doctors in Siberia. However, a professional organization of these assassinations and persecutions testify that these terror acts were also set by KGB GULAG agents.

However, I have no doubt that modern Russian FSB-KGB agents from Moscow and most other places are not people involved in these and many other acts of Russian terrorism. One needs to know history of GULAG labor camps and basics of the famous Milgram study on obedience to authority in order to realize that when Soviet leaders left mass murderers alone (fewer than 10 people were tried in courts for killing more than 10 million), it is normal that they must continue to do the same.