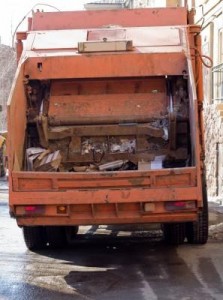 Thousands and thousands of garbage trucks are involved in special security intelligence operations every year. Drivers are recruited as stooges. It is done due to the highly imaginative nature of modern national security agents-watchers (those secret agents who monitor nearly every place and building, and their targets too). The symbolic nature of garbage trucks would be nearly impossible to understand for an ordinary person unless there are practical examples of their application. Why would national security agents-watchers secretly send garbage trucks to their targets? The examples below are short representations of real-life situations which were experienced by one target (a person I know), while secret agents are trying hard to elicit a response from this target using various techniques where garbage trucks played their specific roles. However, the meaning of garbage trucks may differ from an agent to agent, and this is exactly how this target experienced garbage trucks in different countries, states, and cities.

If this agent wants any further communication with the target, there are numerous options. If the agent is in a good mood, he may send people using their cell phones as if there is something that is transmitted into the mind of the target. Or the agent can send dog owners with their pets. If the agent is slightly annoyed by the actions of the target (e.g., the target is too slow to move out), he can send a mentally retarded person or several retardants with their guides, or the agent can send a blind man walking with the stick forward (searching the path). Finally, if the agent is totally unhappy about slowness of the target to apprehend the higher truth hidden behind the garbage truck, the agent can send bikers on noisy Harleys, or street junkies in sporty cars (with heavy rock so that the body of the cars and windows of houses around start to vibrate), or fire trucks and ambulances with sirens.

The same situation of sending the same garbage truck could take place if there is another agent who wants to show that this particular place is unsafe (e.g., due to some third parties), but the remaining area of this city is suitable to remain for the target. Thus, this agent can send exactly the same garbage truck with all the same factors and parameters. Later, the agent can go to a mirror and gladly comb his hairs thinking, “Now he will not like this place and will leave for another place in our area. How smart I am…” If the agent sees that the target still stays in this place, the agent has several options for further interactions: dog owners, people with cell phones, mentally impaired or blind people, or Harleys and trucks with sirens. You can see that there are many artistic choices for improvisation.

Now imagine that there is a third agent who wants to anti-condition the target in relation to the whole country! How could he achieve this grandiose result? He would find a garbage truck and send it to the target in exactly the same setting. Later, this anti-country agent will go to a mirror thinking, “How he will not like to remain in our country. How SMART I am…” If he wants any further communication, he has the options described above.

These are all real stories. There are even more. Imagine an agent who wants to show that some street is dangerous due to activities of some third party (a large Mafia or another criminal group). This agent would send a garbage truck along the same street. Later, this agent would come to a mirror thinking, “How he will not like this street because of the Mafia. How SMART I am…”.

If the target was radiated by the secret agents in the past and suffer from hypersensitivity to electricity or electromagnetic fields, then the same garage truck can symbolize high electrical cables going under this street. Such an agent would also visit a mirror thinking, “How he will not like this street because of electricity. How SMART I am…”.

As one can see, due to exclusive and highly creative abilities of national security agents, such a simple and mundane object (a garbage truck) can have multifunctional applications with several versions of the higher truth. Note that each agent is rock confident in the specific meaning of his particular garbage truck while superficially all these situations look totally the same. The target, while witnessing and reflecting activities and thoughts of secret agents, would surely feel himself like a total idiot in a company of highly artistic geniuses.

Furthermore, when the target moves around, the company of “messengers” that transmit signals from the secret agents (garbage trucks, the mentally retarded, people in wheelchairs, blind with sticks, bikers on Harleys, street junkies in sporty cars, ambulances and police with sirens, etc.) is following him. If the target tries to project the same density of the mentally retarded, people in wheelchairs, noisy bikers, street junkies, and so on other parts of the city, then the target may realize that this city is probably one of the creepiest places in the world full of all types of downers, weird and disturbing noises, strange or offensive smells, and so forth.

Effects on the target

The effects of such activities of secret agents (and the same effects are expected in thousands of other situations when agents “artistically” manipulate the environment of the target) are predicted bylaws of the psychology of performance. Such laws govern the performance of athletes, musicians, and anyone who is to execute or do some job. These laws tell us that the well-performing person needs to have 100% certainty or confidence in knowing what to do. If there is a challenging task, as during sports contests or other hard-to-achieve challenges, then 1% of doubt can be enough to screw up his or her performance.

For example, in professional sport, if there were 100 messages from the coach and 1 message generated 2% of doubts in the athlete, then, out of these 100 messages, this one message with 2% of doubts is going to produce the decisive impact of the final outcomes provided that the athlete view his or her coach as a source of reliable information. (As an alternative, the athlete, of course, can assume that he or she is dealing with the silly or crazy coach and then all these ideas are inapplicable.)

We may not like these laws of performance, we may have hard feelings against it, claim that the sweet dreams of agents can change these laws, but the laws do not care about emotions. It requires 100% certainty inaction of the performer.

Above cases indicate that the real effects of garbage trucks, bikers, and other types of artificial actions can create 50%-50% certainty or 25%-25%-25%-25%, or any other since various options may have a different weight. For example, the target may decide that it is 90% about this option and 10% about another option. Then this 10% will predict the performance of the target. Note that, as it was the case with another retarded person, Dr. John Watson, the former President of the American Psychological Association and the author of the Little Albert experiment, fantasies, and dreams of agents about the effects of dubious actions are irrelevant to the actual truth.

Conclusions. According to laws of psychology, and these laws do not care about fantasies of the agents, their dreams, titles, or positions, even if there is 1% of confusion (version A vs. version B in the head of the target), the activities of the agents resemble defecation on the brain of the target. Since the use of these “kind of natural” techniques is exceptionally common in modern agents, the end result and the main effect of their work is confusion and loss of motivation of their targets.

Effects on the secret agents

It would be naive to expect that organizing such shows of creeps and downers does not produce any impact on mentality and attitudes of the secret agents themselves. This topic is covered on another page How Secret Actions of Security Intelligence Agents Shape Their Future Behavior.